From Davido to Arole, How Nigerian Celebrities Aid Investment Scams

It was May 2021. Uduak Attah-Ochinke she realised she had been fleeced to the tune of N1million by an Instagram vendor, who guaranteed a huge sum of money as interest for her investors.

In keeping to his New Year resolution of increasing her finances, Uduak had struck a deal with a “trusted” Instagram hair influencer, Tessy Akpu Oluchi, in February.

Oluchi had impressed Uduak and many others with her affiliations to different online celebrities such as Mizwanneka, and with a remarkably slick website where things worked with ease, Uduak concluded that the investment deals advertised by Oluchi were legitimate.

Celebrities and influencers are popular for doing numbers when they endorse products and services. Therefore, for years, they have always been the go-to for ads and promotions.

They have people who are dedicated to them through their craft and they are able to convert them into customers. Seeing a public figure endorse a brand gives customers a sense of security.

This was the case of Christiana Ibeh, another customer, who lost N72,000 in the process of purchasing hairs from Oluchi.

“Seeing Finefunky Collections praise Oluchi’s Hair by TCM on Instagram, I had to give it a trial,” she told FIJ in August. “But since January 10, Oluchi has been telling me stories.”

Recently, a Nigerian patronised an online gadget shop only to be defrauded of N500,000. The victim was trying to purchase two PS5 from Kavitech, a mobile gadget shop endorsed by Bayegun Oluwatoyin (Woli Arole), an Instagram entertainer. However, he received neither the gadgets nor a refund.

READ ALSO:  What could a Joe Biden presidency do for affordable housing

The victim had seen the brand on Arole’s page and thought it was credible. Although, the entertainer in question returned to declare the venture a scam, the harm had been done. 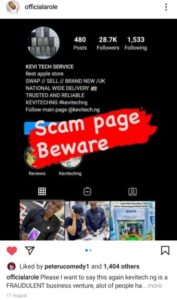 Endorsements more popular among celebrities often involve investments, housing, forex trading and even banking. Racksterli, an online investment platform which claimed to pay 40-50% return on investment, crashed about a year after it started.

The scheme was endorsed by celebrities like David Adeleke (Davido), Divine Ikubor (Rema) and Williams Uchemba, causing thousands of people to jump on it. For a while, it fared well, making payments as agreed, but it soon crashed as it was a Ponzi scheme that only thrived on people’s referrals. 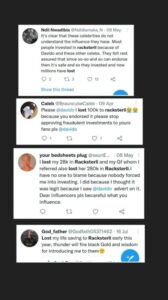 On Thursday, Bimpe, one of Racksterli’s victims, whose N28,000 is stuck in the scheme, told FIJ she lost little compared with others.

“They returned some people’s money, so I really have hope that they will return mine. My money is relatively small when compared to that of others,” she said.

Recently linked to Davido is Rapdoge’s coin. On July 19, he tweeted about the coin, asking people to “hold” it. This prompted a lot of people to buy and, of course, ‘hold’ it with the hope that it would increase in value with time. However, not long after, the value of the coin dropped, leading to a huge loss for holders and investors. 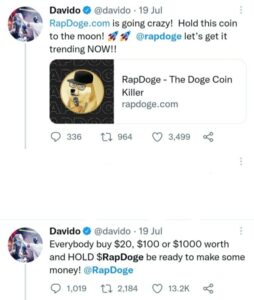 The endorsement of Adelove Shipping, a shipping US-based company which constantly disappoints customers, is another failed endorsement by Davido.

In July, FIJ reported the case of Blessing Rita whose luggage was never delivered by Adelove. For seven months, the cargo freight company held on to five boxes of baby items sent by Rita’s sister. That itself was the second such case in 10 days reported by FIJ.

In a broadcast by CBS Chicago, Jermont Terry interviewed a couple of customers who had fallen victim to the shipping company. A man said he paid Adelove $1500 to ship a car to his mom but it was not delivered and no refund was made.

While celebrities endorse carelessly and rake in dollars, citizens who love and trust them fall victim to the scams they promote.