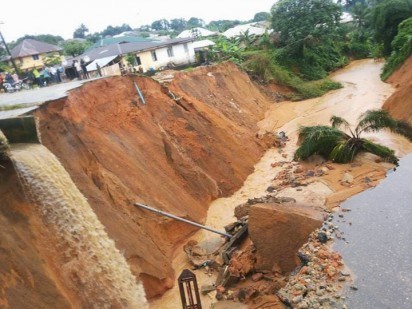 Attention of the Lagos State Governor, Babajide Sanwo-Olu, has been drawn to the imminent flood and erosion that threaten lives and property of residents in Lagos Island, particularly, Adeniji-Adele Estate and environs, following the persistent rainfall in Lagos.

Concerned by this trend, a Non-Governmental Organization, “Rethinking Cities” which aim is to address the challenges of urbanisation in Nigeria and Africa, has stressed the need for the state government to act fast to save imminent, daunting threats by ensuring prompt intervention in order to prevent natural disasters in the state.

Speaking, during a tour and on the spot inspection of some of the endangered communities in Lagos, which included, Anthony Village, Maryland, Ojota and Adeniji-Adele, Deji Akinpelu, co-founder of the NGO, said, “The ideas are based on the findings of our research, Urban Planning Processes in Lagos”, many of which could be implemented within a short time requiring low funding but transparent and efficient cooperation among different stakeholders, but with the required political will.

The organization which is also interested in finding solution to problem of encroachment of land in Lagos, For instance, land such as wet land and land for recreation, noted that the state being an informal city and its future development being driven by the informal sector, especially considering the expected population growth in the next decade believed that the vision, design and planning of the future city has to be done with a priority of addressing the needs, wishes and capabilities of the informal sector.

According to Akinpelu, flood resilience and inclusiveness have to be the main drivers for a sustainable development of the city. The implementing agencies, Lagos State Gardens and Park Agency, LASPARK and LASURA, have to play a more prominent role in achieving developmental goals in future.

“They need strong political backing and upgrade, and financial and human resource investments. “Similarly, new infrastructure and new investments will remain white elephants if local governments are not given back their capabilities to execute their constitutional duties in urban development.

This has to be done in a gradual process through pilot cases with clear benchmark schemes”, Akinpelu said.

Speaking on the flood and environmental hazard at Adeniji-Adele, Ayotunde Akomolafe, the Project  Officer, Arctic Infrastructure, alerted that some estates are disaster in waiting if nothing was done as soon as possible.

According to the project officer, Adeniji-Adele Estate, which is one of the worst-hit communities, is a low-income housing development which comprises 120 residential blocks of two bedroom and three-bedroom apartments in four ‘Phases’. “The strategic location of the Estate between Ikoyi, Victoria Island and Lagos Mainland provides direct physical access to up-scale social and economic infrastructure within the heartland of the city.

Furthermore, the proximity of the estate to Oyebanji Transport Hub and the Third Mainland Bridge allows for direct road access to different parts of the city, both on the Island and the Mainland, and horizontal access through to the heart of the South-West region of Nigeria.

“As at the time the estate was established in 1983, it was considered an attractive residential community and access was competitive. However, factors such as the proximity of the site to Lagos Lagoon, low-lying terrain and external physical development infractions have seen the Estate decimated by floods over the years.

“The Lagos State Government, particularly, during the tenure of Governor Babatunde Fashola, has developed a number of drainage and flood control-related plans. However, the 2015 Lagos Drainage Master Plan is the first to address the Adeniji-Adele area with any level of detail.

“The Lagos Drainage Master Plan 2015 adequately took cognizance of necessary factors such as area topography, tidal variations and climate change, among other variables, to ensure that the city of Lagos – including Lagos Island and Adeniji-Adele – is flood-resilient. However, despite the existence of the plan, the flooding challenge faced by the neighbourhood is so persistent that large parts of the Estate remain perpetually submerged.