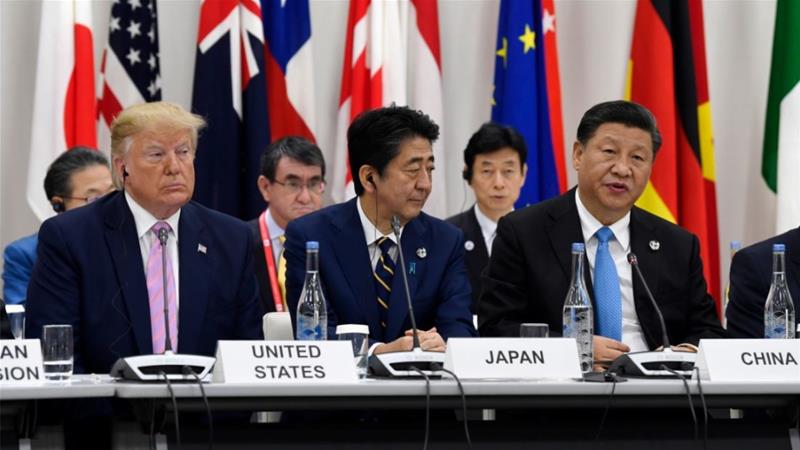 Donald Trump and Xi Jinping seem eager to put an end to a fractious trade war that looms large on the global economy.

At the ongoing G-20 summit, the pair struck a truce in their trade war and agreed to return to the negotiating table to pick up from where they left off after talks fell apart last month.

Trump said he wouldn’t be putting additional tariffs on China for the “time being,” and that he’ll allow U.S. companies to supply Chinese tech Giant, Huawei Technologies Co.

Trump also said Chinese President Xi Jinping had promised to buy “tremendous” amounts of U.S. agricultural products in exchange. “We’re going to give them a list of things we’d like them to buy,” Trump said at a news conference following the Group of 20 summit in Osaka, Japan.

Agreeing to start fresh negotiations with China is no outright guarantee that a trade truce may finally be in the offing, but there’s no denying that Trump’s change of tone means a layer of worry about global growth has been removed.

The significant downside risks from the 18-month old trade war between the world’s two largest economies had threatened to disrupt the global economy and caused economists to forecast a slowdown in global economic growth this year.

The International Monetary Fund (IMF) lowered its growth forecast for 2019 to 3.3 percent- the lowest since the financial crisis- from the previous level of 3.5 percent in its latest World Economic Outlook (WEO), marking the third time in six months that the fund revised its outlook downward, as the trade war worsened.
A trade truce would put some of the fears about slowing global growth to rest. It would also give global equities a boost.

—How Nigeria benefits from a truce

A trade truce between the US and China is not only beneficial to the global economy but also to Nigeria, Africa’s largest oil producer.

That’s because wherever global growth goes, the demand for crude oil tends to follow.

In periods of economic booms, oil demand jumps, along with prices, but when there’s a slowdown demand softens and prices fall.

This is not to say there aren’t other factors that could cause oil prices to climb in the face of an economic slowdown (like when there are supply disruptions).

The positive relationship between oil prices and global economic growth is one Nigeria benefits from.
That means if a trade truce is struck and the global economy is able to perform better, then the price of oil- which accounts for the single largest chunk of government revenue in Nigeria- is likely to increase, implying more cash for Nigeria.

More cash for Nigeria translates to a stronger chance of implementing the 2019 budget, which is predicated on an oil price of $60 per barrel.

A possible downside of the truce would be the negative impact of a stronger dollar on the exchange rate. The stronger the dollar, the higher the chances of a weaker Naira.