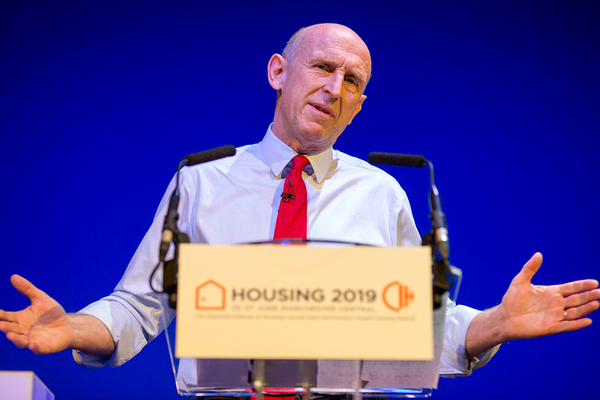 John Healey was delivering a keynote address immediately after Ms May’s surprise appearance at the event in which she said that her government had changed attitudes towards housing and created “a whole new approach for social housing”.

“I must say, I listened to the prime minister just a moment ago. You’re a kindly crowd. You gave such a sympathetic hearing to our end of days prime minister,” Mr Healey said.

“I found it a sad speech in many ways. So little to show for three years in Downing Street.

“During those three years in Downing Street we’ve seen rough sleeping rise. We’ve seen the number of families – and kids in particular – in temporary accommodation rise, now to 124,000.

“And we’ve seen – whatever she said about the importance of social housing – the level of new government-backed social rented homes built last year fall to 961.

“And even today as prime minister, she was still only able to promise change in the future on building standards and on social housing.”

The Wentworth and Dearne MP claimed that Conservative party ideology is a key barrier to building more social housing, arguing that if the government had continued to deliver new social rented homes at the same rate as Labour had in its last year in office, there would now be more than 180,000 extra units.

Just 6,463 social rent homes were completed in 2017/18, the second lowest level after the previous year since World War II.

Asked in a Q&A following his speech about the housing sector’s call this week for £12.8bn of affordable housing funding a year, Mr Healey said he supported the report, but added: “Is it realistic? It’s rough cut calculations, but a valuable contribution to the debate.

“I don’t think the National Housing Federation itself could cope with a tenfold increase in housing budget next year.”

He also reiterated his support for party leader Jeremy Corbyn, adding that “unless we can persuade people to give us the chance to get into government we’re wasting our time”.