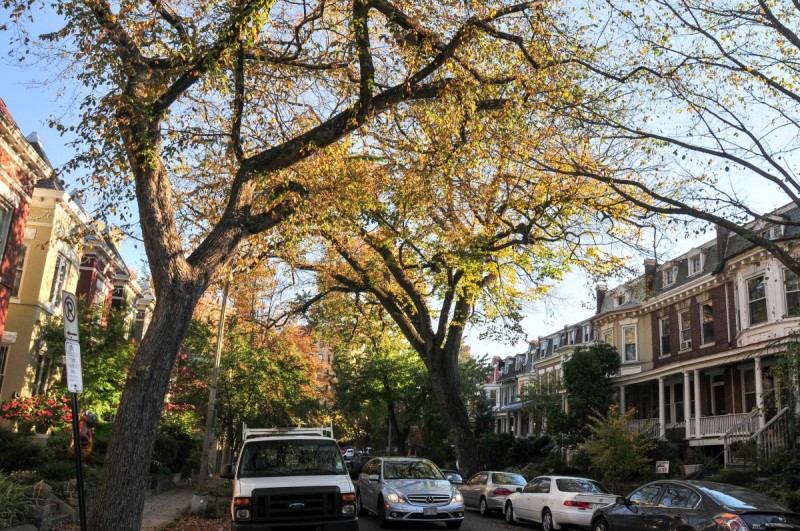 We all know Mid-Atlantic summers can be oppressively hot and humid. To me, sultry days in Richmond feel like I’m walking around inside someone else’s mouth! The bad news (for me and anyone else who experiences heat as a sweaty human) is that the number of days per year with a heat index—or a “feels-like” temperature—above 95°F is expected to at least double by mid century. Let’s talk about how land use factors into this equation.

As you probably know, extremely hot days can feel very different depending on where you are within a city. Sitting on a bench along a shady stretch of a densely-canopied park might feel reasonably comfortable compared to walking through a vast reach of hard and dark surfaces like a shadeless asphalt parking lot surrounded by brick walls.

Much like when you wear a dark shirt in direct sun, these low-albedo, impervious surfaces absorb and hold more of the sun’s energy during the day and then re-emit it back into the air during the afternoon and night as heat. These human-made structures physically amplify and extend heat waves more than natural landscapes.

This phenomenon is known as the “urban heat island effect.” It’s been studied extensively over the last several decades, and has its roots in weather observations from the early 1800s. But recent research I helped conduct revealed that some neighborhoods with tall buildings are actually relatively cool.

A 16 degree difference between different parts of the city

Just how much hotter these landscapes get and what particular aspects of underlying land uses lead to the most extreme temperatures (either hot or cool) has been for the most part an open question until recently. Being able to combine direct observations of urban air temperatures during heat events and land use/land cover in a machine learning algorithm has enabled us to learn more.

In summer 2017, the Science Museum of Virginia (where I work) and the Portland State University SUPR Lab teamed up with a network of local collaborators, volunteers, and newscasters to measure Richmond’s heat island effect. We observed a 16°F difference between the warmest and coolest spots in our city at the same time on the same day!

Last summer, with help from the National Oceanic and Atmospheric Administration Climate Program Office and the Office of Education, the National Aeronautics and Space Administration, the Anacostia Watershed Society, and the DC Department of Energy and Environment, and other organizations, we mapped and modeled the District’s heat islands during that late summer heat event you may remember on August 28, 2018.

To do this, volunteers used precise electronic temperature sensors hanging out of our cars’ passenger windows paired with GPS units running at the same time to keep track of where we were and how hot it was every single second. We collected data for one-hour time intervals at 6 am, 3 pm, and 7 pm to give us an approximation of the coolest, hottest, and early evening temperatures.

We threw out data collected when we were stopped, moving too slowly, or moving too fast so we could be confident in the data’s quality. In total, we collected over 74,000 temperature readings across the District. Here too, our results showed a ~16°F difference between the warmest and coolest spots in the city during the hottest time of the day (3-4 pm).

As you might guess, the coolest places had lots of dense shade canopy and vegetation (Rock Creek Park) while the hottest places were low-slung, high-density areas with very little tree cover and wide, multi-lane streets (Columbia Heights). Most of the hottest places also remained at these elevated temperatures well into the evening. Take a look at the heat DC map we produced with a neat-o slider feature here.

Building size matters for shade too

Looking closely, you might notice that places with relatively narrower streets and taller buildings, or at least with more variation in building heights, seem to have more temperature variation than others like Shaw and Convention Center. This might seem surprising, given the press about air temperature and tree canopy that we’ve heard a lot about recently.

Turns out this is consistent with a study published in 2016 for a heatwave observed in Portland, Oregon. It showed afternoon temperatures were most strongly affected by nearby building heights and their local variation (closely trailed by tree canopy). This also held true for temperatures into the evening (7 pm).

While we didn’t explicitly model building height variation’s affects in our studies of DC, Richmond, and Baltimore, similarities pop out in that the dense, building height-varying urban cores have relatively lower air temperatures than the sprawling, wide-streeted but single-height residential areas that lack extensive tree canopy. Turns out this isn’t a new discovery, but it is one that we could use to advance density as a physical microclimate control.

In 2012, a University of Maryland/NASA scientist modeled the temperature impact of lowering building heights in areas of DC and Baltimore, concluding that this would actually raise the hottest daytime temperatures by almost 3°F, while adding tree canopy lowers these extremes by over 7°F.

Computer modeling studies that simulate increasing building heights in Adelaide, Australia show that once building heights surpass the width of the street, this creates urban canyons that shade the street surfaces and cool the air.

Observational and modeling studies of other cities in different parts of the world suggest this to be true as well. While we can’t completely offset the urban heat island effect with increasing urban canyons, adding in green infrastructure can further offset heat amplification (though this clearly depends on the land use/land cover too).

During San Francisco’s recent extreme heat wave, Kevin Burke, writing for the Bay City Beacon, outlines the housing policy that has historically limited the availability of shadows. He believes an aversion to housing density is inadvertently exposing people to warmer temperatures.

Is housing density—specifically designed to be taller than the width of the adjoining streets in order to increase shade—an underappreciated way to mitigate the impacts of climate change? These results are promising! If you’re interested in learning more, you can read the full report featuring Richmond’s urban heat island results, along with data collected in Baltimore, MD, and Washington, DC.