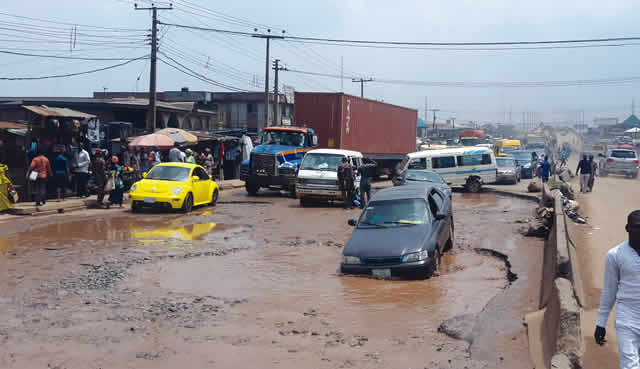 The Federal Controller of Works in Lagos, Mr Olukayode Popoola, has said street trading and extortion from agencies around the Ota flyover on the Lagos-Otta-Abeokuta Expressway are slowing construction and compounding gridlock.

He said this during an inspection of Lagos-Ota-Abeokuta and Ota Idi-Iroko Road projects on Thursday, alongside his Ogun State counterpart, Mr Umar Bakare, according to a statement.

Popoola, who was represented by his Project Supervisor of section one of the project, Mr Adewale Adebote, said that the construction work was being slowed down by activities of traffic regulatory agencies.

He said the Ota flyover was being redesigned to include major outfalls to address flooding caused by traders on the axis.

He said, “Between chanage 17 plus 100 to chanage 18 plus 600, a distance that covers Temidire, Sango Garage, Under Bridge and Joju Bus Stop (the two bridge approaches), has been redesigned and considered to be reconstructed as rigid pavement for durability.”

Popoola said the ongoing reconstruction/rehabilitation works on the Lagos-Ota-Abeokuta Expressway would be completed before the end of 2022.

On his part, Bakare, during a media tour around Ota flyover, the roadsides and drains occupied by traders, said the underpass of the bridge had deteriorated.

He said, “This place is almost completed before tipper garage, for those of us that are familiar with this road know how it used to be; the Abeokuta-bound of it has been completed. The Lagos-bound is nearing completion. After completion of works here, the contractor is moving to Itori-Lafarge around Papalanto.”

Speaking on behalf of the Ogun State government, the Permanent Secretary, Ogun State Ministry of Works and Infrastructure, Mr Lateef Yusuf, said the government would address the issue of the traffic officers.